Happy Birthday Jemini! Star Captains: Get your Seasonal Rare Jemini Hologram from the shop in Soluna City and display it on your starship.

Memorial Day Mecha Models: For this year's Memorial Day, Ash has developed a mecha that has three different color schemes. The Tactical Land Assault, Naval Assault, and Aerial Assault models share the same specials. You can find them in the shop on Soluna City's Main Street. 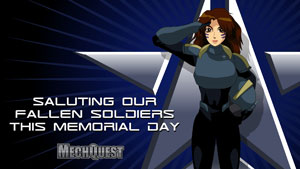 Art: Thank you, everyone who submitted art on the forums! The new exhibit is now live in the Art Museum in Soluna City West, featuring artwork by

If you are a Star Captain, you can pick up your favorites in Circe's shop in the Art Museum lobby to hang in your starship! 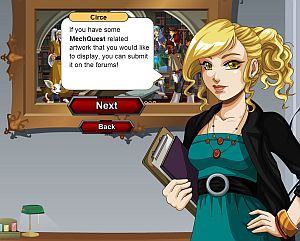 And now, a word from Ash.

Greetings! This week Maegwyn was on vacation and left Vivi and I in charge. I was able to get to the T.V. remote, recliner, lemonade, and garage door opener first, so Vivi had to watch what I wanted to! Muahaha! I also totally didn't break anything huge while she was gone. Make sure to stay away from the Beta Quadrant when you're out exploring space though...I *might* have broken part of reality over there. No worries though, it'll be alright since I put a giant sticker over the hole. Just don't tell her.

Anyway! I worked on a few more small bugs that were reported. I got them taken care of and will keep working on some of the larger and more stubborn ones. Make sure to keep reporting any bugs that you find.

As a reminder, PLEASE put your Character ID AND your Character Name in the "Username" field of the bug report. That helps me to be able to check things about your character. Putting only your character name is helpful if it's the only one of that name. Since there are lots of names that aren't unique, having the Character ID lets me check and see what the issue is with that specific character.

Also, please give as much information as you can. Putting, "THIS MECH DOESN'T WORK!!!" tells me the mech doesn't work, but not much else. What about the mech is broken? Did you try it in a different quest? Are you using all the default weapons or are you using some other equips? This isn't only for Mech bugs either. Any bugs that you find, put every bit of info you can in the description so we know what to test and possibly what else might be causing the bug if it's not the mech. It might be the quest or it might be one equip you didn't think was an issue. If it takes a paragraph to really explain it, I have lots of time to read, so feel free to write it all out.

Now for this weeks item. Everyone likes cookies right? Who wouldn't? There are all kinds and some are even extra-dimensional in origin. Well, I decided to use one of those extra-dimensional cookies, found by Plasma Charge, to make a weapon. They are REALLY random, but if you're lucky enough you'll get a nice buff and inflict a nice nerf on the enemy.
(Yes this is a fun release and shouldn't be used to confirm the evidence of a "Cookieverse". I need to have fun occasionally too.)

Hope you all enjoy and I also hope you're in the mood for games. Yep, it's getting close to that time of year so make sure to pick a house if you haven't. Have a fun weekend!

Thanks, Ash! Enjoy your weekends, everyone!

Hi! I'm going on vacation tomorrow for a week! I'll be checking my email and the forums and twitter when I have internet access. MQ is in good hands with Vivi and Ash doing next week's update, and Korin is going to help post Design Notes for you, so you probably won't even notice I"m away.

Greetings! This week I worked on getting a bunch of the bugs that were around, and that you all reported recently, fixed.
There were a bunch, and I can't mention all of them, but to sum up everything.
- A bunch of typos.
- Item bugs.
- Mech bugs
- Travel Map bug
- Romero quest bug

I also have a hunt tonight for you all for a new type of mod. These still boost stats but they boost a different set then you all usually see. I'm working on seeing about putting extra effects on new mods for some true passive effects but for now I wanted to put these out.
What better way to do that then a hunt through the game! I'm hiding the mods in a shop and the following is your clue.

"Struggled to be free, fled from destruction, leaving pieces behind with a kind of kin."

Good luck and feel free to work together on the forums! Have fun!

I wanted to mention that you might want to build up your stash of credits because there's an o.Ops weapon planned for later this month. Good chance to run into Richy the Rich Guy in the Soluna East mission this weekend. Also, we've got a little something for you on Mother's Day so definitely log in again on Sunday!

Good luck with the hunt, everyone!

Maypril the 4th E With You

Well this is embarrassing... there's a critical issue with the Maypril quest involving cutscenes and player positioning that makes it unplayable and that has taken me way too long to sort out. So things remain color-faded until further notice. Which shouldn't be too much longer. But you know what they say about the best-laid plans... mmm scrambled eggs! It'll end up being better than it would have been.

We're laying the groundwork for some great new features and continuing to plan ahead for a very exciting set of releases while we work on bugfixing. I am so excited about all of this coming together for you!

May the 4th E With You: Be sure to log in on May the 4th to get a cool new holiday rare E-blade. Classic "lightsaber" styled weapons to fit the holiday. There will be versions for NSC, SC, and NG. Clarion made a whole lot of them, and Ash is inspired to add more colors -

Greetings! Some of you mentioned that you weren't fans of the way the 4pri1 mech worked, so we took that into consideration for the Maypril mech. Blues and I talked about a few things and we came up with the following for this year.

In other news I did a few more revamps for Lagos. Robina's shops will have a bunch of higher level items for you guys. Hopefully that will tide you all over since I've done about all I can for right now. I'll revisit the planet in the future but I need to focus on some new stuff. Enjoy the F001 and I look forward to hearing what you guys think of it. 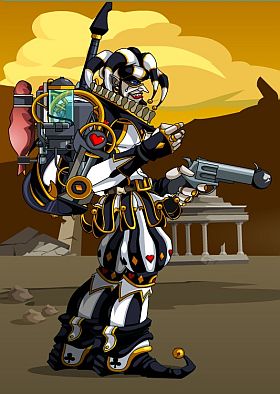