How To Get The OmniKnight

The Ultimate Prize: the OmniKnight Blade!

The Cursed Tape Reappears... will you watch?

Quest to recover 7 of the 13 cursed artifacts in AQWorlds:

Once you have recovered all 7, talk to Artix to merge them into the Omni Artifact!

Artix has been cursed, and is stalking the wilds with the ShadowFire Axe of Curses!

Capture Thok with the Cursed Phoenix Blade... if you DARE!

Enter the Wastelands to find a scrap of the Mysterious Necromancer's cloak!

The 12th anniversary event is heating up... and so is Hottica's zone!

After you've recovered all the artifacts listed above:

Head to the Portal Site and log into your Master Account.
Go to the Quests tab to check your event progress. You are looking for 7 green checkmarks. If a game is not checked off, you have not found the artifact in that game.

If you DO have all 7 checkmarks, you'll see a box appear saying "Congratulations! You have found all the cursed artifacts!"

Click the link that says "Click here to get your prizes!" and you will go to your Achievements tab. You should see "Artix Entertainment 12th Birthday Event" achievement under "What's New?"

Click that to get your prize code, then go to the "Redeem Codes" page to unlock the OmniKnight Blade in each game!

It is our 12th Anniversary-- and we hope you enjoy this year’s cross-game event, “Phantom of the Pixel!” The idea of cursed items crafted from dead pixels is…. spine-tinglingly awesome! The event spans AQWorlds, EpicDuel, DragonFable, MechQuest, HeroSmash, Oversoul and the original AdventureQuest. With the coming of the new mobile games, it might be too hard to have another full cross-over games event like this… so do this one while you still can!

I would sincerely like to thank you, and everyone who has been a part of this incredible journey. Thank you to you and all of the amazing gamers who login and battle in our video games. Thank you to all of you who give us encouragement and much love on the forums, twitter, facebook and all of the other ways you talk with us. Thank you for not just playing the games but contributing your creativity and clever ideas. Thank you to everyone who believes in us and supports us by upgrading or buying things in the video games—because of you we can afford to keep the lights on and the server hampsters running at full speed. It has officially been 12 YEARS of weekly, non-stop updates! THANK YOU!

Our video game’s “weekly new releases” — where we add new quests, maps, monsters, weapons & content to the game — is something that is really special about our community. AdventureQuest classic was one of (if not the) first to do it. We have been compared to long running shows like The Simpsons, Southpark, and Saturday Night Live with our game’s history of weekly releases. But there is one big difference… TV shows run in seasons and the cast and crew… take breaks. We do not. We never have. As a whole, the AE team has delivered a new video game update/release every single week for 12 years. Our games never take holidays off — the team and I actually work harder and have larger releases during them!

Because of that, I would very much like to recognize and thank the AE team — all of the artists, animators, writers, coders, the moderators, the forum staff, and all of the volunteers for their hard work. I am extremely proud of these passionate super heroes. Thank you all, too — players, team, and all the people who love us and put up with our crazy video game habits — for making Frogzards, Moglins and DoomKnights a part of our everyday life!

P.S. Ooooh… NEXT year will be our 13th Anniversary… we should up the bar and change the format. Better start brainstorming now. Open to ideas!

In honor of the 12th anniversary, players of all seven of the company's games have a joint mission: to find all 13 Cursed Artifacts.

In MechQuest: Your mission is to meet up with River at 472 Limegreen Terrace.* She will fill you in on what's happened and what you need to do to help! Gather up the cursed artifact before it's too late...

Hint 1: To find River, you should go to Soluna City's Main Street and have a quick chat with Jack.

Hint 3: When a shop opens, you should be sure to take that item and keep it in your inventory because it's necessary for your collection! 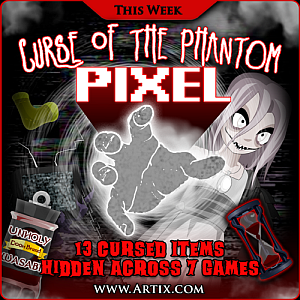 Read all about it here http://www.aq.com/gamedesignnotes/12thbirthdayall-4327

And don't forget to visit http://www.artix.com/ for a running tally of when each game's event goes live!

* Why that address? Tweet me with your theory using the hashtag #MQ-Tape

Greetings!
Many of you have been asking what we had planned for the next big storyline and now you all can find out! You can access the new quest, which will begin the brand new main storyline, in Soluna Main right now!
Right now you'll be able to access it without having to play "The End", the end of the previous main storyline, but that will change in two weeks. If you haven't completed the ending, which includes the conclusion of the biggest war against the Shadowscythe ever, you really should first as this new quest might be a bit confusing if you haven't.
There's also a limited time reward if you complete the quest now. There's a brand new mecha drawn and animated by Minar! 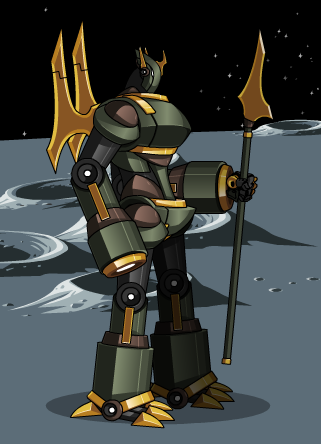 After this week it'll be replaced with a new mecha created by Lyris with a few additions by myself. The mecha by Lyris and I will be around permanently though as the reward from this quest.
Make sure to be careful when attempting the quest, the enemy inside has resistances to 2 damage types as well as the ability to gain additional resistances as you battle against him. This'll be a really tough fight if you aren't careful!
This quest is only possible thanks to the entire team. We all spent months planning and coming up with ideas, especially for the new main villian. I wrote and built the quest but Maegwyn, Lyris, Gianna, Minar, and everyone else on the team contributed so much to get this ready. This storyline is going to have you exploring all over as time goes on, to planets and places in the universe you haven't seen yet. It's going to be a wild ride and I hope you'll keep checking back to see how crazy it gets!
I also want to take a second and thank all of you, the players. Without you we wouldn't have anyone to make this content for. Your support and feedback is what makes us that much more excited to do things every week. The amount of support recently for MechQuest made me work extra hard on this quest to show you all that we're going to continue to put out the best content we can for you guys.
Enjoy the quest and let us know what you think of it and the new enemy!

No-score and seven years ago, our four-or-five-fathers brought forth a ... new Dropship, and planned for its (crash-) landing in Soluna City... and here we are today, still exploring the vast multiverses! 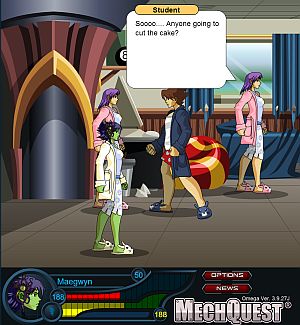 7 Years! Woo Hoo! Time to get your party on!

In honor of the occasion we are bringing you updated Anniversary-themed items that you can pick up downstairs at the party by riding the Floorivator at Tek's Mechs. The Pajama/Cake party (accessible via the GEARS Parties button) has an updated dialogue reflecting on some of the events of the past year.

Coinciding with the anniversary, this release also brings a change to stat training. You still get 5 points per level to spend - 6 if you upgrade to Star Captain - but now you can train them faster. You can now train 10 points per session - and 20 if you are a Star Captain!

Star Captains may now get an item for your starships that essentially turns stat training into an "online course." Instead of having to battle a bazillion times to retrain your stats, you just allocate 20 points and press the "Train" button. Bazinga! No more marathon sessions required just to change your build. Pick yours up today at the button in Soluna City Main!

We have a super-huge release planned for this Friday - the big Anniversary quest! Ash has been working like a madman and coordinating with Lyris, Minar, Blues to bring you...

SORRY for the delay in posting! I was called away! When is someone going to clone me...

MechQuest's NEW Storyline! and it's coming with a

Log in now for the celebration! 20% Bonus Credits & XP continues. Join us Friday, October 3 for the new storyline and be sure to grab yourself the commemorative mecha before it is gone forever!

Thank you all so much for playing MechQuest. Here's to another great year! Party on!