Hey Questers! Just thought I'd stop by and drop some DNs on the table for you guys. There's a lot to talk about, so let's get to it!

First up is our plan for this week. The goal is to release something for the higher level players, specifically those between levels 41 and 50. However, there is a twist! We are going to be taking suggestions for non-rare things you want at those levels this week. Tweet your wish list to us

( @MaegwynAE & @PractelAE ) with the hashtag #MechQuest and we'll see how many we can get in-game! Watch the Design Notes for shop info.

Secondly, I know some of you have been wondering where I've been for the past couple of months, and honestly, life has just sucked all of my time away! I plan on returning full-time and ready to rock and roll in one week. Get ready for a lil bit mo Practel in yo life!

Finally, shoutout to Jemini because it's her birthday! In honor of this special occasion, we are releasing a "Jemini Statue" which Star Captains can collect, just like Jemini herself! Congratulations @JeminiAE on the level up!

Well, that about sums it up for me right now. Take it easy, pilots!

Here is a Sneak Peek

Work continues:  Our mission to deliver a Gremlin-free quest marches onward - here's a sneak peek at a battle that is working exactly as intended - set against a beautiful background from J6.

Korin & I are working on sorting out a fix for the teenytiny player in cutscenes - can't give you a screenie of that, though, since it'd be a HUGE spoiler.

BATTLE ON! The Shadowscythe themselves seem to have been aligning themselves against the MQ Team - if something could go wrong, it probably did - but we're pressing onward because WE ARE MAKING THIS HAPPEN! Ghost wrote an amazing new soundtrack, "System Overload," which I'll be setting up as a Starship item Stereo player for Star Captains for a low introductory price to thank you for your patience and your continued support.

Everything seemed like it was good to go for today's release. Received the missing background, and the finalized cutscenes. Plugged it all in, and... 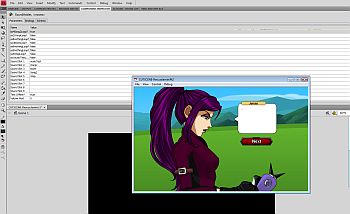 When it's set to False, it won't loop. It'll play, and then it'll stop playing. Pretty simple, right? Well as it turns out, everything depends on how you define "it." "Song2" can be set to True but if what's playing is "musicTest", which is set to False, you can set "Song2" to True over and over and over, but what you hear isn't going to loop as intended,  because "it" is not Song2.

Same thing with the cool sound that should play and then stop playing (except when it doesn't ever stop playing, even when you thought its Loop was at False... but Flash reorganized the component elements, so its Loop was actually still set to True). And what if you really don't want to hear sounds at all? The sound toggle button works everywhere else, so it should just be a matter of inserting a layer and plugging it in. Right? Right? ... how can that not be right?

All the components are lined up like ducks. In a row. We're now going to get them to swim together in a synchronized dance.

Korin & I worked together to figure out what was going wrong while Plasma Charge worked on testing potential fixes and pointing out issues. I figured out why the player was facing backwards and fixed that, so you won't encounter that Gremlin. We work hard to get everything bug-free and I'd also like to thank Elryn, Gibby, Practel, and Vivi for taking the time to pitch in.

As always, thanks for your support - your responses and messages always affect the team, as we read everything you say even when we don't necessarily have time to write back.

The Cinco de Mayo Weapon Shop is Live! Happy Cinco de Mayo! Pick up a Limited-Time Front Arm weapon - the Go.Oogly. Celebrate the spirit of Maypril Foolery when you attack. (Hint: Turn up the sound!) 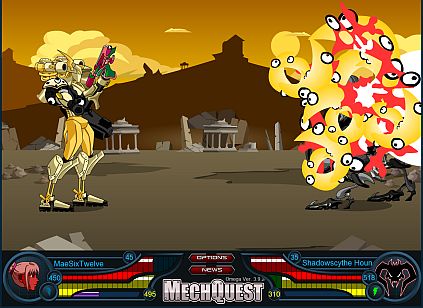 NG Special Effects:
*Good Chance for a critical hit
Damage Increasing Over Time!, Increases Boost by ( was +10 every turn for 5 turns) +18 per turn for 3 turns.
+18 bonus for every successful hit x 3 turns.

Enjoy the holiday! I left the Clover O.ops shop open because I read on the forums that at least a couple of people are still farming credits for it. So, have fun, enjoy the rest of the weekend, and, as the saying goes....

Star Date: May the Fourth (Be With You)

Go.Oogly! A Maypril RARE weapon is almost ready for you! I worked VERY late (it's was 5:30 AM in the Undisclosed Location when I started writing this note to you) - and, among other things, modified an old weapon with some new graphical assets and sounds to create a new theme for it. Still need to tweak the specials  - everything is functioning so the coding shouldn't take me too long. Oh, and still need to decide the levels, come up w/descriptions & names, and make the database entries - sounds like a lot, but goes quickly. My plan is to give you a Cinco de Mayo Shop. Ideally I'll have it ready to open on Sunday, May 5th - should be doable! Watch this space and the homepage for updates! 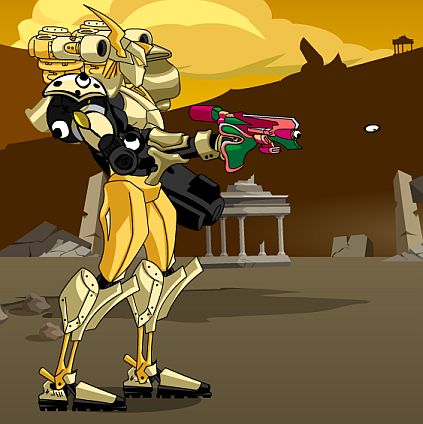 The Story Behind the Design: One of our players, known as #Kale on the forums, suggested that we make an O.ops version of one of the starting guns as a Maypril fool.  I didn't want to just release a weapon that only players with 5,000,000 credits could get, so I decided to do something different with the o.O part of the theme.

o.O: Gibby recently linked me to a series of photos of googly eyes stuck onto store packaging, and that fed into the inspiration for the weapon. I remembered that we released a carrot weapon - a gun that shoots little carrot flechettes that stuck into the enemy & hung there before exploding. So I thought maybe I could figure out how to convert the existing animation. It was a little fiddly figuring out how it was done, but it's always fun when you get that "aha!" moment.  Then I started recoloring and redecorating it. The really fun part was figuring out how to attach the sound effects! I think you'll find it amusing.

Maypril Mecha Delayed: I know that many of you are eager to get the traditional holiday super-RARE mecha and I do apologize for not having one ready for this Maypril. Everyone is working overtime on Finale assets and although we did talk about doing a mecha, the art and animation wasn't practical to schedule in, and had to be put on the back burner. I do still want to give you some kind of foolish, fun mecha this year, but I can't promise you a date.

Upcoming Installment of the Finale Quests - Rescue Jemini: We had hoped to have this ready by Friday - we still are in need of one background, but that gives Vivi more time to code the new enemy you'll be up against (and more time to test & balance). Blues also came up with specials for an SC Challenge version, so Vivi will code that after finishing the regular version. Korin has been building the quests in "bare bones" framework so I/we can add the art assets as they come in. J6 and Minar both made some BEAUTIFUL backgrounds for this mission. Ghost did the cutscenes, which are AMAZING. I really love the facial expressions in the first one - we can hardly wait for you to see them in game! He also has a wonderful new soundtrack, and I'll be making a stereo for those of you who are Star Captains to put in your Starships (along with a bunch of new Starship Items).

NPC Enemies: During some of the upcoming Finale missions, you'll be on foot battling more NEW enemies. I've been working on some new swordfighting monster AI - not a global revamp of the swordfighting engine, but a fresh approach to creating the enemy tactics. These individual enemies are getting unique attacks which should turn out to be fun, requiring a little strategy beyond just hitting Strong Attack (or Magic) with your strongest Energy Blade. I got the Casting animation to work in the monster file I was doing earlier this week, so there's a chance I/we can apply this to make other existing swordfighting enemies do some interesting things in the future as well.

I can't say too much about the NPC enemies because it's an ENORMOUS spoiler, but I can tell you that Alina sent me a WHOLE LOT of files this evening (er, I guess that's yesterday now) and one of them is an NPC I was eager to start working on! So I did get started on converting it to an MQ-style monster in the wee hours of the morning. I learned quite a lot about how the body parts are put together due to a sizing issue when attempting to replace an existing head with the new one. I'm looking forward to doing more with this! And the top-secret NPC whose casting animation now works is one who only had a front-facing view - Minar created a side view so that the battle wouldn't look weird.

Missions After This Next One: Plasma Charge made some backgrounds that will be in an upcoming mission, and he's working on art for a new mecha-battle enemy. He's in the midst of his Leaving Certificate so he's pretty swamped with school. Vivi, Practel, and Arklen are also quite busy at their schools, so I'll add more news about what they're up to when their schedules free up a bit!

Thank you for playing MechQuest! May the Fourth be with you (and I'll update with Cinco de Mayo news when I know

I think the weapon is looking good! Just needs me to do a bunch of database entries (unless I or another tester finds a last-minute Gremlin) - and I also need to adjust some files before rolling the Go.Oogly series Live.

Going to get some sleep and I'll catch you on the bounce-around! With a shop and lots of nice weapons for you!