We Arr So Busy

Things written previously & not yet shared wi' ye - we arr so busy:

Dragon*Con: It was wonderful to see so many of you - you are the reason I go! I hope to see you again (or for the first time) next year!

Artix did a wonderful Dragon*Con recap a while back, with many great photos - here's the link

I was very honored when Artix took the time during the panel to thank me and the MechQuest team. I am hoping that someone has video.

I am still sorting through over 800 mostly blurry images taken with my phone... so I have a couple of good ones to share with you that were taken by other people.

Arrrr, me mateys! I'll catch up with ye scurvy dogs (just kiddin' there hearties) on the forums and will try to get me poxy pate on twitter later! Bit busy a'countin' men on a dead man's chest ... Plasma Charge has a few words for ye meantime!

TLaPD 3012 Boneyface and return of Swashbuckler! Ahoy me ‘arties! T’day Captain Rhubarb himself will land in Soluna City with a NEW limited-time haul o’Boneyface Heads! These heads were recolored by Jemini and then animated with a NEW attack by Korin. Maegwyn also added some new "trashtalkin'" to the dialogue. They’re offered in all flavours (NSC, SC ,NG) and will leave even the best captains jumping at a chance to get one. 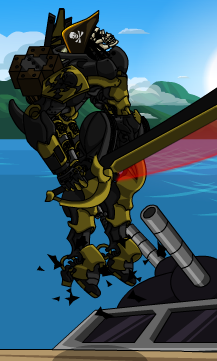 Let's see whether I can quote Practel without breaking the page margins the way I usually do... hm - how about a different color for the text instead of an indent...
This week in MQ is the return of TLaPD! To start the Talk Like a Pirate Day event, head over to the main part of Soluna City! For players who have completed last year's TLaPD event and are looking for something new, there is a NEW (very awesome) head weapon which will be available for you. This head is specially recolored with an actual attack animation, along with actual attack damage. Check out the screenshot below!
http://i45.tinypic.com/i5sok3.jpg
"Yarr me matties, I be stormin ye 7 seas!"
VERY special thanks to Jemini, who recolored both the awesome new head weapon and the newSepulchure of Doom Mecha (which is already available via the Stranger in Soluna City East). It seems like tons of people love the new coloring, and hopefully you all love the new head as much as I do!
Fixin dem DN's
Last week I made a Dragon*Con Recap Design Notes post, but forgot to mention 2 very special players. These players have been long time fans of the games, and genuinely care about us and the game as a whole. The first player - ACW. ACW is now a very close friend of mine, and also Maegwyn's, and it was a pleasure and honor to finally meet the player that has kept us company on twitter, in-game, and over every other plane of existence for these past several months. He hiked out all the way to Dragon*Con just to see us, and has left a genuinely great impression on all of us.
The second player - Cody486. Cody486 is a very awesome player who also visited us at Dragon*Con. Unfortunately, I did not have the pleasure of meeting him, but immediatly following the 'con, his name was brought up among several of the staff (for all the games.) He is a kind, genuine player that really brightened the staff's day, and not only that, he is also Maegwyn's birthday twin!
It was a pleasure to meet ACW, and I hope to officially meet you next year, Cody!

There were a ton more awesome players, but unfortunately we can't list everyone right now, but it was a pleasure to see all of you!
BattleOn!

Thanks, Practel! (Did that work with the text color change ok?)
Just wanted to add this: I know that a long-time forum member, Stephen Nix, is one who I ran into at the pizza party, I *think* at 'Con for the first time - and then some people I got to hang out with a bit in years past also were back but as usual, my time is super-limited so hunting down people's game or forum or twitter names isn't happening today yet again... it was definitely great to see all of you!
Arrr - belay this! The decks need swabbin' as the pongo is gettin' a bit reeky! 'Til Wednesday, mateys! =Mae

Arrrr ye ready for more booty, me mateys?!!? Check out the Event tab in the Shops button for some higher-level versions of weapons from TLAPDs past!  There's a L43 Colichemarde for NSC, a L45 for SC, L45 Parrot shoulders for NSC, SC, and NG, and L45 NG Schiavona arm & Rhubarb's Mortar shoulder.

Avast, me hearties! Holiday Boost Extended!  Enjoy th' extra credits 'n experience for the rest o'th'week! Ye can rack up an overflowin' chestful in preparation for the numerous holidays that Autumn brings to MQ, so keep a-battlin' all week and tell yer mates.

After a few sentences, I kind of run out of piratey lingo, so I'll just go back to my normal style here... we're already at work on something Korin has in the wings that's brand-new for everyone for this Friday, and planning ahead to add the promised next stage of the SC Extreme challenge for next week.

Also I wanted to clear up a bit of confusion I've seen on the forums regarding the new streamline shop view. The streamlined style of shop is only for permanent shops like Tek's Mechs (and in the future, possibly the Star Captain Club shops, for example - only for equipment that is intended to be available permanently) so you will still be able to see and buy all levels of Holiday and One-Day style rares.  (And by the way, thanks for the bug reports in Gremlins - this morning, Korin fixed the issue where nothing was showing up in your inventory - you might still see an error message flash sometimes, but check your inventory after your Tek's Mechs purchase and you should have your new equipment.)

Hope you arr havin' a fine time talkin' like Pirates, and gatherin' Pieces of Eight!

DragonCon was awesome this year! You can read a detailed rundown on the AQWorlds site

Char took an amazing photo of MQ's intro to the MechQuest portion of the panel - we gave away hand-painted t-shirts and called all the recipients up to the front!  Korin's Minions en masse!

There is a story behind the shirts, actually... They were having a sale at a craft store that isn't far from where I live , and when I saw the brown shirts I bought... all of them!  I believe the final count was 18, which accounts for the ones given away to Korin and Lyris plus I'm not sure who was too shy to come up to the front for the panel.  I made a few here at home, but was nowhere near done by the time I got on the plane for DragonCon.  The bus from the Secret Underground Lab arrived a couple of hours after I landed in Atlanta, so that gave me time to sit in the lobby of the Marriott Marquis and letter all of the shirt backs with www.mechquest.com in (theoretically) glow-in-the-dark fabric paint.  I got a few of the faces finished - but the bag outline is puffy paint, and takes a while to dry, so I saved that for later.  I was planning to recruit Charfade and Jemini and others - but everyone went to bed early, and Korin & I were the only ones awake!  So, we sat outside my hotel room up on the 32rd floor of the Marriott (so as not to awaken Geopetal) and drew Korin bagheads under some very hot lights.  Korin was wearing this awesome shirt that looked like a horse converted into a dragon - well, we had some visitors who saw us making the shirts & stopped to comment... turned out that one of them actually printed the shirt he was wearing!  What are the odds of THAT???