Fourth of July Mecha: Staying until Friday, July 17, and then this seasonal rare will be out of the shop.

For those preferring to use Nova Gems for your purchasing power, a question or two:

Were you hoping to get enough Nova Gems from Ballyhoo?

What page do you use for your Nova Gem purchases?

Please let us know on the forums - or if you prefer Twitter, tag @MaegwynAE with the hashtag #MQNGS so we can work on meeting your needs.

I hope you are all having a great summer - staying cool in the Northern Hemisphere and keeping warm in the Southern Hemisphere. Doing anything new or special? I'm listening to lots of great music and taking guitar lessons in my spare time.

I'd like to make a big shout-out to Ash and Lyris for their dedication and hard work that they do to make exciting updates happen for you.

As always, thank you so much for playing MechQuest!

Happy 6th Birthday, MechQuest! Has another whole year gone by already since this time last year? It seems so long ago, while at the same time it feels like it went by in just a blink.  Log in now to go downstairs to the party & grab the limited-edition Mecha Models of Yore - and log in this weekend to pick up your commemorative Starship items and see what kind of Birthday Mecha we've cooked up for you! 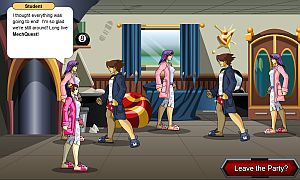 Can it really be 5 years ago today that we first entered the Dropship in our journey to Soluna City on Planet Loreon? Seems impossible that it could have been that long ago! And we've been traveling all over the universe since then, exploring new planets and gaining more allies against the Shadowscythe hordes that are threatening worlds everywhere! Thanks to all of you for your support, contributions, feedback, suggestions, and friendship! It's been wonderful getting to know so many of you on the forums, on facebook, on Twitter, and even in person at Dragon*Con over the years!

Anniversary Mecha: This year, Jemini gave us a redesigned "Wrapped" Nubertron - it does have the Nuberizing special on the head along with tons of new specials for 3012! I heard on Twitter that one player would have liked us to show details of it being wrapped - you'll just have to imagine the bigger-than-mecha-sized Wrapping Station - and them being wrapped, as @JeffTechnoWizAQ said, "by.. uh giant hands? Robot hands?!"  If you use Nova Gems, you can get one that levels with you (1-10, 11-20, 21-30, 31-40, 41-50). Star Captains can merge the Newbatron with Golden Tokens for the SC models, and everyone can use Silver Tokens for the merge to the non-Star Captain credits versions. (I accidentally made the non-Star Captain merge using Golden Tokens at first but I fixed it.)

For Star Captains: Minar made some new Starship Items and I updated a few myself as well with this year's date, & put a new title next to the yearbook - plus I made you a Wrapped Nubertron Action Figure.

Gremlins: We got a report that everyone in the party - including the girls - has had the male hairstyle every time there's been a slumber party - which I somehow never noticed! I figured out to fix that, and I'm just working on some updates to the dialogue to reflect some of the highlights of the 3011 - 3012 season. I'll roll that out in a few minutes but I wanted to come back & finish writing you these notes first while it's still October 1st. Thanks, as always, for letting us know what needs fixing!

Special Thanks to YOU! Most of all, thank you for playing MechQuest! You're the reason we work so hard to bring out updates each week! I - along with the MechQuest team - am looking forward to another great year of making new releases for you!

Birthday Mecha Model: Golden Katana! This year, the Katana is getting a huge makeover to celebrate MechQuest's four-year anniversary.  Korin is creating new animations for its new head and body attacks, and has updated the look and action of the arms and shoulder animations.  This model will have default weapons in all slots.  Blues has designed exciting specials with Star Captain and Nova Gem exclusives. I'm putting together the merge "recipes" for the NSC and SC versions and setting up the Nova Gem pricing and levels - there will be lots and lots of levels so there's something for everyone.  This year's NG models will be priced at 800 Nova Gems (previous years' models prices will remain unchanged) - so if you grab one of the 2000 NG packages you have a lot left over to use for commemorative Starship items, or Salvage quest weapons, etc.  Don't forget you can also use your Artix Points- you can still earn points via the Ballyhoo ads in Cinemech in Soluna City (or in the Dropship) and of course earn via the Portal where you can also purchase Points.

Another Anniversary: Vivi!  I haven't kept detailed records about the MechQuest team member dates, but a phoenix happened to scrawl a fiery message across my screen that tomorrow, the 6th of October, marks the one-year anniversary of Vivi's MQ coding debut! He's been an enormous asset to the team and in fact thanks to him, the Dodge function is getting an update this week!  Keep an eye on the Design Notes this week and don't miss the Birthday Celebrations for more about Dodge!  He's been coding all the weapons and mechas and also has been coding some of the quests - and now this update to the MQ Engine really marks another milestone.  Hooray for Vivi!

Fireworks, Birthday Boost, and More:  Friday will bring fireworks to Soluna - AND with the engine change for the Dodge update we're also going to roll an XP boost!  Star Captains will get NEW starship items, and you'll all be able to get mechas from the previous birthdays like last year.

Also I wanted to mention that I have gotten a lot of questions about the ETA for the next SCMM - Arklen has been busy with the 3 new House Mechas of course, and that comes with the Level Cap raise to 50 - so we're estimating that the next SCMM will be sometime in November.

We're finalizing plans for all the Fall and Winter holidays that come along so quickly - not just the MQ Birthday but also Mogloween, Turkey Day, and Frostval - along with all the permanent content updates listed in the Coming Soon section of the newsletter - so Korin and I have been working together on juggling it all to set down into dates for the team.  We have a lot of things in the works for upcoming releases.  Lyris is prepping for more of her awesome animated cutscenes, I'll be writing some quests, we'll be collaborating on some - blues has been working on updates to some of the older mecha models and the SC Xtreme Challenge - Vivi coded up a tough Boss version of one of our recent quest encounters so I will be setting that up as an SC Challenge... we're looking at your suggestions for Tek's Mechs and more - much, much more.  The year ahead is shaping up to be exciting already! We're excited to bring it all to you - log in Friday to kick off MQ's New Year with a brand-new mecha!

Thank you for making our donation possible!

Child's Play is a charity that raises money to make lives better for sick children in hospitals around the world. It was started by gamers, like you and me, and is a cause that the BattleOn Games Team feels very strongly about.

We Can Has Key and Other News

MQ is Back to Posting Design Notes!

If you were watching Korin and me on Twitter this past Friday, then you know we accidentally got locked out of our Design Notes site... and now, as you can see - we're back!  You already have the link to Warlic on Twitter on the Design Notes Page but did you know that you can also follow Vivi and Azami and lots of members of the Artix Entertainment  BattleOn Games team?!!?

We have been reading your forums posts, and it does make sense that if you have one of the Energy Blades from Necryptos, you want something that will compete with that blade.  We are putting together a merge system so if you've already bought one of the Evil Jim Replica Axes for the art style, you can "Amplify" it for more power. It will cost a few more credits or Nova Gems to convert your "Axe" into the most powerful Energy Blades currently in game.  Note that the level requirement will raise to L21 after the merge!

We have lots of cool holiday stuff and I had better get back to work on it, so for now I will just say Thanks for playing MechQuest, and Battle ON!!!